The History Making Constitutional Provision Of Impeachment – By Daniel Sheridan

On this day, July 27, 1974, the House of Representatives votes to recommend the first article of impeachment against President Nixon for obstruction of justice (You can see the full text of the impeachment here: http://watergate.info/impeachment/articles-of-impeachment).

“The President, Vice President and all civil Officers of the United States, shall be removed from Office on Impeachment for, and Conviction of, Treason, Bribery, or other high Crimes and Misdemeanors.”

The power of impeachment of public officials was one of the many English practices that Americans perpetuated and improved. The House of Commons had impeached some of the King’s ministers; however, the King could pardon them. So the English improved that practice in the 1700s when a law was enacted declaring that impeached officials couldn’t receive a royal pardon. This assured the English people that the King’s ministers would be held accountable for their actions. The King, however, couldn’t be impeached.

James Iredell gives the background of this provision when speaking to the North Carolina Ratifying Convention on 28 July 1788:

“In that country, that is England, the executive authority is vested in a magistrate who holds it by birthright. He has great powers and prerogatives, and it is a constitutional maxim, that he can do no wrong. We have experienced that he can do wrong, yet no man can say so in his own country. There are no courts to try him for any high crimes; nor is there any constitutional method of depriving him of his throne. If he loses it, it must be by a general resistance of his people…Under our Constitution we are much happier. No man has an authority to injure another with impunity. No man is better than his fellow-citizens, nor can pretend to any superiority over the meanest man in the country. If the President does a single act by which the people are prejudiced, he is punishable himself… If he commits any misdemeanor in office, he is impeachable, removable from office, and incapacitated to hold any office of honor, trust, or profit. If he commits any crime, he is punishable by the laws of his country, and in capital cases may be deprived of his life.”

Throughout history when rulers misbehaved the only recourse for the people was violent overthrow or assassination. But the U.S. Constitution provides for a peaceful way of ousting corrupt public officials. Impeachment powers are granted to the House of Representatives. Article 1, Section 2 reads:

“The House of Representatives shall…have the sole power of impeachment.”

This assures the American people that the President, Vice President, and all civil officers are accountable to the House of Representatives, that is, to We The People. Instead of violent overthrow, We The People, through our reps, hold our leaders accountable for their actions.

“The Senate shall have the sole power to try all impeachments. When sitting for that purpose, they shall be on oath or affirmation. When the President of the United States is tried, the Chief Justice shall preside; and no person shall be convicted without the concurrence of two-thirds of the members present.” 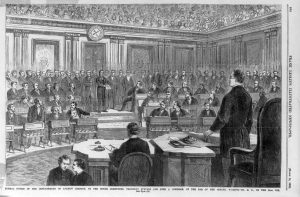 mere party motivated indictment. For instance, history seems to bear out that Andrew Johnson was impeached on solely party lines, and though most voted to convict, they were still one vote shy. The provision seems to have worked in that case.

If the accused is convicted, Article 2, Section 3 reads,

“Judgment in cases of impeachment shall not extend further than to removal from office, and disqualification to hold and enjoy any office of honor, trust, or profit under the United States; but the party convicted shall nevertheless be liable and subject to indictment, trial, judgment, and punishment, according to law.”

The President, Vice President, and all civil officers, if convicted, are removed from office and are forbidden from holding future office in the national Government. But that’s not all. The convicted person can still be tried and punished in a normal court of law.

America is a Government of laws, not of men. The American tradition teaches that nobody is above the law. Americans took from their English heritage and improved it. In England, they got as far as impeaching the King’s ministers, but, as William Blackstone confessed in his Commentaries, “That the king can do no wrong is a necessary and fundamental principle of the English constitution.” But in our Constitution it is a necessary and fundamental principle that any leader can do wrong and will be held accountable for it.

We can be proud of our American system of government which sets an example for the world – our leaders are accountable to the people and the transfer of power is a peaceful process.