Swedish-American inventor, mechanical and Naval engineer, John Ericsson, was born on this day, July 31, 1803, in Sweden.

In 1836 Ericsson invented the screw propeller for steam vessels

which was a huge improvement over the paddle wheel. However, it wasn’t until he moved to America a few years later that American shipbuilders began to realize the greatness of this invention.

By 1838 steamships were making regular trips across the Atlantic bringing back with them laborers from Europe, thus increasing our population and creative talent at the same time.

Ericsson’s inventions also helped change the course of Naval and World History during the Civil War. The Confederates were dominating the seas with their iron-clad ship. John Ericsson, in just 100 days, invented the crafty “Yankee cheese-box on a raft,” the famous Civil war iron-clad called, “The Monitor,” to neutralize the Confederate beast. 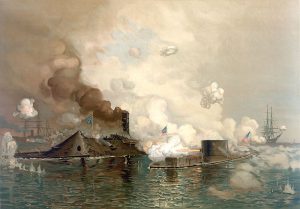 On March 8, 1862, the Monitor encountered the larger Confederate Virginia. “A multitude beheld the encounter…from the shores near and far. The superior size and armament of the Virginia were neutralized by her unwieldiness and depth of draught. The Monitor, more active, and passing everywhere over shoal or through channel, could elude or strike as she chose. Neither had much power to harm the other; each crew behind its shield maneuvered and fired for the most part uninjured…On the morning of that day both North and South believed that the Confederacy was about to control the sea. The anticipation, whether hope or fear, vanished in the smoke of that day’s battle. With it, too, passed away the traditional beauty and romance of the old sea-service: the oak-ribbed and white-winged navies, whose dominion had been so long and picturesque, at last and forever gave way to steel and steam.”

Ericsson has been described as one of the most influential engineers of all time, without doubt nineteenth century America’s greatest Naval engineer, and a genius with an “indomitable zeal.”