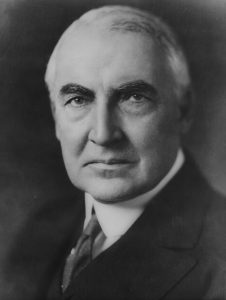 The Death of President Harding, A Quick Constitutional Study, And The Swearing-In Ceremony of Calvin Coolidge By The Light Of A Kerosene Lamp – By Daniel W Sheridan (Twitter: @DanielWSheridan)

Warren G. Harding was elected President on November 2, 1920. This was the first Presidential election in which women voted and it was the first election where the results were broadcasted over radio. 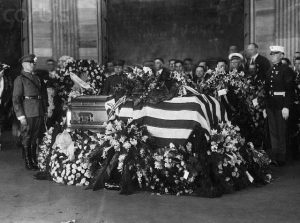 which took a toll on him physically. From Alaska he went to California where he became sick and died suddenly on this day, August 2, 1923.

“On the night of August 2, 1923, I was awakened by my father coming up the stairs, calling my name. I noticed that his voice trembled. As the only times I had ever observed that before were when death had visited our family, I knew that something of the gravest nature had occurred. He placed in my hands an official report and told me that President Harding had just passed away. My wife and I at once dressed. Before leaving the room I knelt down and…asked God to bless the American people and give me power to serve them.

My first thought was to express my sympathy for those who had been bereaved and after that was done to attempt to reassure the country with the knowledge that I proposed no sweeping displacement of the men then in office and that there were to be no violent changes in the administration of affairs. As soon as I had dispatched a telegram to Mrs. Harding, I therefore issued a short public statement declaratory of that purpose. 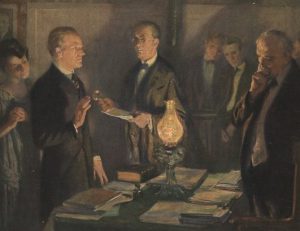 Meantime I had been examining the Constitution to determine what might be necessary for qualifying by taking the oath of office. It is not clear that any additional oath is required beyond what is taken by the vice president when he is sworn into office. It is the same form as that taken by the president.

Having found this form in the Constitution, I had it set up on the typewriter, and the oath was administered by my father in his capacity as a notary public… The oath was taken in what we always called the sitting room, by the light of the kerosene lamp, which was the most modern form of lighting that had then reached the neighborhood. The Bible which had belonged to my mother lay on the table at my hand.”

Those were the words of Calvin Coolidge. Do you know what he did after he was sworn in? He went back to bed! He wasn’t called silent and cool Cal for nothing.

Let’s close with one funny story about President Coolidge. He was at a dinner party where the woman sitting next to him told the President that she had made a bet with a friend that she could get him to say more than two words that evening. President Coolidge, Silent Cal, replied,

Two words! That’s all he said the rest of the night. She lost the bet.

“I have never been hurt by anything I didn’t say.” Calvin Coolidge

“No man ever listened himself out of a job.” Calvin Coolidge