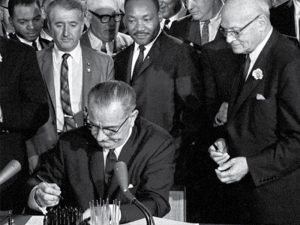 “The Congress shall have power to enforce this article by appropriate legislation.”

Even though the Constitution provides for equal voting rights many were still denied those rights 95 years after the Amendment became part of the Constitution. Thus LBJ signed the “Voting Rights Act” deemed “appropriate legislation” to “enforce” the Fifteenth Amendment.

President Johnson wanted to create what he called, “The Great Society.” A society where the promise of the Declaration of Independence that “all men are created equal” applies to everyone.

LBJ believed he was fulfilling that promise with the following measures: Voting Rights Act, Medicaid, Federal Aid for Education, Environmental Protection laws, Food Stamps, Head Start, NPR, The Arts and Humanities Act, The Public Broadcasting System, Consumer Protection Laws, and The Civil Rights Act. These measures, created during the LBJ years, are still with us today.

When LBJ signed The Civil Rights Act he said,

“There goes the south for a generation.”