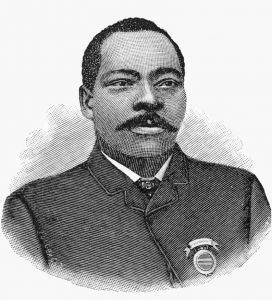 The Black Edison: The Thirteenth, Fourteenth, and Fifteenth Amendments, Free Men, and the Unleashing of Inventive Genius – By Daniel Sheridan

The Thirteenth Amendment of the U.S. Constitution abolishes slavery in the United States, the Fourteenth guarantees citizenship to those who were denied it because of their skin color, and the Fifteenth grants them the right to vote. African Americans were now free! And where there’s freedom, the inventive genius of the free man is allowed to thrive.

Granville Woods (April 23, 1856 – January 30, 1910) was an African American inventor. Although his formal schooling ended when he was ten he took his education into his own hands. Granville did such a good job self-educating he became a successful mechanical and electrical engineer with 50 patents to his name.

His achievements were so impressive the magazine, “The Colored American,” in its November 14, 1903 edition, called Granville, “The Black Edison.”

Granville is recognized as the first African American to become a mechanical and electrical engineer after the Civil War. This is confirmed by the “Arizona Sentinel and Yuma Weekly Examiner” in its May 09, 1912, publication. It reads:

“INTERESTING STATISTICS OF THE COLORED RACE…From information just published it is learned that the negro population of the United States is now 10,000,000…The following historical information is interesting…First colored electrical inventor, Granville T. Woods.”

Woods directed much of his inventive genius towards increasing the efficiency as well as the safety of railroad cars. The Black Inventor Online Museum says,

“Woods developed the concept of a third rail which would allow a train to receive more electricity while also encountering less friction. This concept is still used on subway train platforms in major cities in the United States” (See link below).

“Be it known that I, GRANVILLE T. WOODS, a citizen of the United States, residing at Cincinnati, Ohio, have 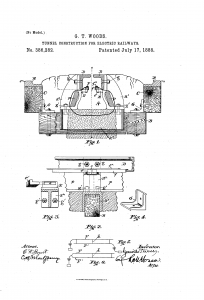 invented new and useful Improvements in Tunnel Constructions for Electro-Motive Railways, of which the following is a specification…My invention relates to tunnels for carrying the conductor or conductors of electro-motive railways, its object being to produce an economical and efficient construction for carrying said conductors below the surface of the ground, in which position they may be reached and utilized by the traveling contacts upon the car or motor through a slot at the surface of the roadway…”

Notice how Granville calls himself, “A CITIZEN OF THE UNITED STATES.” He could never have said that without the Fourteenth Amendment! Thank God “We the People” revised the error of our ways and Amended the U.S. Constitution. Without this amendment we would never have benefited from the inventive genius of free men like Granville!

The Fourteenth Amendment, concerning the Rights of Citizenship, ratified on July 9, 1868, reads in part:

The U.S. Constitution: Read it. Know it. Share it.

You can read more about Granville Woods here: http://blackinventor.com/granville-woods/