The American Presidency: A shining example in victory, in loss, and even in shame. – By Daniel Sheridan

When the Constitution was first written there were no term limits. George Washington could have served as president as long as he wished. His life is full of examples of heroism on the battlefield, but one of his most noble examples is what he did at the end of his second Presidential term.

Washington knew the world was watching the American experiment, so he gave them something amazing to see when he willing stepped down after his second term, a move unheard of in world history! It’s not how Washington used power, but how he relinquished it that made him great. As President he had demonstrated the power of the office; but when he willingly stepped down he showed the world that the American President, unlike Kings and Tyrants, is a mortal and fallible man just like his fellow citizens.

John Adams succeeded Washington. Adams ran for a second term in 1800, it was a hostile

election where the press played a huge role for the first time. The papers were full of slanderous and unfair characterizations of the men who gave birth to our country. The very men who gave their lives, fortunes, and sacred honor, in times which tried men’s souls, were now being portrayed as their county’s greatest enemies – the country they created!

Adams lost the election becoming the first sitting President to suffer defeat. The world was watching again. Many were worried about the transfer of power. The pages of ancient and modern history are stained with the blood of violent overthrows. This campaign was harsh. Would Adams step down willingly? Will a bloody power-struggle ensue?

America, once again, put on a history making show for the world! Adams accepted defeat and peacefully departed the seat of Government. We owe John Adams a debt of gratitude for providing a wonderful example of a political leader accepting defeat and encouraging a peaceful transfer of power.

Jump to the 1970s. Richard Nixon is president. He was caught spying on the Democratic Party during the election; we know this as the Watergate scandal. Nixon arrogantly claimed,

“When the President does it that means it’s not illegal.”

This sounds like the old divine right of king’s theory resurrected in 1970s America! But our wonderful system prevailed over such arrogant claims! Congress wanted Nixon to turn over the tapes, Nixon said no. The Supreme Court voted unanimously to side with Congress. Nixon then resigned knowing the tapes would expose him. Nobody is above the law in America! 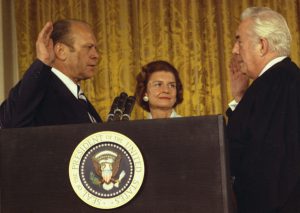 president of the United States without any violence. The new President said,

“My fellow Americans, our long national nightmare is over.”

Washington stepped down willingly after two terms. Adams accepted defeat and left the seat of Government. Nixon resigned while in office amidst a scandal. All these were peaceful transfers of power. So in victory, in loss, and even in shame, the American institutions are shining examples to the world.