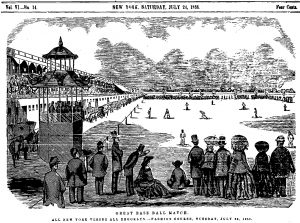 It’s our game . . . it has the snap, go, fling of the American atmosphere; it belongs as much to our institutions, fits into them as significantly as our Constitution’s laws . . .” – Walt Whitman

The game of baseball started taking shape in the 1840s when a volunteer firefighter and bank clerk named Alexander Joy Cartwright together with some of his buddies formed the New York Knickerbockers Baseball Club. Cartwright invented the rules which made the game what we know it to be today; the diamond shape field, foul lines, and other features.

On June 19th, 1846, the Knickerbockers played a group of Cricket Players for what is considered by many to be the first Baseball game in history. The Knickerbockers were clobbered 23-1. The game took off after this. Men from all sorts of trades formed teams.

The game became so popular that a December 1858 issue of The New York Mercury declared Baseball to be, “The National Past-Time.”

There were over 50 clubs in the New York area alone by 1858. Special trains took people to and from the games. A rivalry developed between the Brooklyn and New York teams. Leaders of Brooklyn teams challenged the New Yorkers to a game. Then each city chose their best players to play in what would become the first all-star game.

After the All-Star Game, Baseball only got bigger. Not even the Civil War could slow its progress as soldiers played it on battle fields between enemy engagements. After the war, peaceful parks throughout the country were scenes of great games.

The history of baseball mirrors the history and spirit of the United States in many ways: