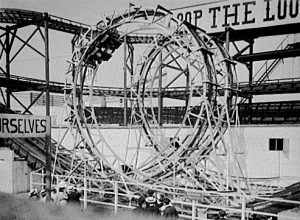 Freedom means more fun! Do you remember your first loop-the-loop?
Edwin Prescott: The Man Whose Invention Made Our Childhood Fun! – By Daniel Sheridan (Twitter: @DanielWSheridan)
On this day, August 16, 1898, the loop-the-loop was patented by Edwin Prescott. The patent reads:
“Be it known that I, EDWIN PRESCOTT, of Arlington, county of Middlesex, and State of Massachusetts, have invented an Improvement in Roller-Coasters…This invention has for its object the production of a novel roller-coaster or railway chiefly for purposes of pleasure…
After this, Prescott goes into technical language describing how the tracks are laid and how the car moves along them becoming inverted in a loop. He also tells us how it’s scientifically possible for a car to be inverted,
“…due to centrifugal action, the contents of the car remains securely in place and the ear follows the track.”
That line about centrifugal action is why Prescott called it the “centrifugal railway.” The loop-the-loop first saw action in North America on Coney Island, New York, in 1901, where the first looping roller coaster was built.
So let’s thank Edwin Prescott for making our summer amusement park outings so much fun!
My first loop-the-loop was “The Demon” at Great America, Gurnee, Illinois, summer of 1984. I 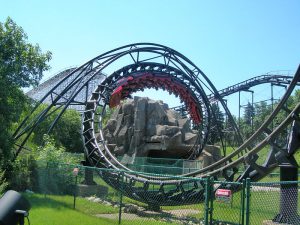 remember vividly standing in that 45 minute waiting-line smelling the cotton candy and hearing Steve Perry’s “Oh Sherrie” blasting over the loud speakers! I can still feel the excitement when my turn finally came to take my seat and when the overhead harness locked me in. Then hitting that first loop…Yaaaaaaaaaaaahoooooooooooooo!!!!
What was your first loop-the-loop?
Remember that these wonderful amusements can only be enjoyed by the masses in an atmosphere of freedom. This is why our Constitution was written! Freedom means more fun!